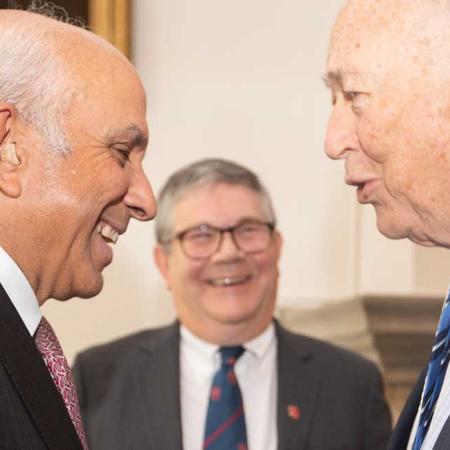 London, ON -  Today, Huron welcomes the university’s very first Chancellor, Prem Watsa, to speak to the university community about “Business as a Calling.”

Mr. Watsa, who is affectionately known as the Warren Buffet of Canada, will address students, faculty, staff and the broader community in a discussion about his extraordinary journey from Canadian immigrant to billion-dollar business mogul. As one of Canada’s most influential business leaders, Mr. Watsa brings a considerable amount of experience to the brand-new position of Chancellor at Huron. This will be his first appearance in front of the student body, and his talk promises to inspire Leaders with Heart at Western University’s founding institution.
Huron is excited to welcome the community to this very special event, asking those who wish to attend Mr. Watsa’s speech to arrive at the university’s Great Hall a few minutes before 11 a.m. as remarks will begin at 11 a.m. sharp.

About Prem Watsa
Prem Watsa’s success can be traced back to when he first arrived on Canadian soil with just eight rupees in hand. He ignited his entrepreneurial spirit while selling air conditioners and furnaces to support his university education.
Mr. Watsa’s beginning is in stark contrast to where he is today. His monumental success can be attributed to an inspirational persistence and refusal to compromise on his vision of building a company that values integrity, fortitude and excellence. For this, and many other reasons, Huron is confident Mr. Watsa will help position the university as one of North America’s leading Liberal Arts institutions.

A member of the Order of Canada, Prem was born in Hyderabad, India. He attended the prestigious Indian Institute of Technology in 1971 where he earned a bachelor’s degree in chemical engineering. He moved to London, Ontario and completed an MBA at the Richard Ivey School of Business. Watsa began his professional career at Confederation Life Insurance Co. in Toronto. In 1984, Watsa co-founded Hamblin Watsa Investment Counsel, which he now fully owns. In 1985, he took control of Markel Financial Holdings Ltd, a small Canadian trucking insurance company on the verge of bankruptcy. He re-organized and renamed the company Fairfax, short for “fair and friendly acquisitions.” The company reached annual revenues of $10 billion in 2014.

About Huron
For more than 150 years, Huron has challenged students to be Leaders with Heart. With a focus on providing a well-rounded Liberal Arts education, Huron strives to be the best strategically small institution in Canada. The Huron experience equips students with the tools to be agents of change who receive faculty mentorship and unparalleled research opportunities from day one.
Photo: Laura Pedersen/National Post files