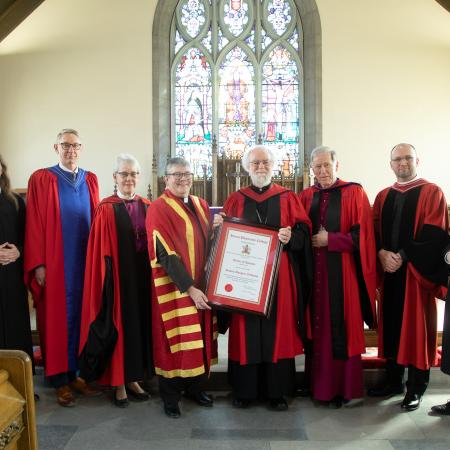 Huron confers the Honourary Degree of Doctor of Divinity upon Dr. Rowan Williams

LONDON, ON – On March 18, 2019, during a special Theology Convocation, Huron University conferred the Honourary Degree of Doctor of Divinity upon Dr. Rowan Williams who served as the 104 Archbishop of Canterbury from December 2002 to December 2012 and was the officiant for the Royal Wedding of Prince William and Her Royal Highness The Duchess of Cambridge.

Huron was honoured to welcome Dr. Rowan Williams to campus where he was awarded with an Honorary Doctor of Divinity. Directly following the award ceremony,

Dr. Williams presented a special lecture to the university community entitled, “What Shall I Cry? How Do We Preach Today?”.

“Our world can be unjust and divided, but there are flesh and blood ways that we can bring people together and inspire hope. And, that I believe, is something worth “crying” about,” Dr. Williams remarked during his lecture.

Dr. Williams’ emphasis on the importance of leading with compassion, selflessness and wisdom seamlessly aligns with Huron’s vision of reshaping the world we live in so that its leaders are encouraged to balance effectiveness with empathy and profitability with moral and ethical conduct.

“We believe society is crying out at this exact point in history for people who are called to lead – but to lead with a heart and a conscience,” shares the university’s President, Dr. Barry Craig. “Dr. Williams’ commitment to cultivating peaceful and inclusive international relations, as well as his unyielding support for vulnerable populations makes him an exemplary model of the Leadership with Heart we encourage our students to develop within and beyond our classrooms.”

For more than 150 years, Huron has challenged students to be Leaders with Heart. With a focus on providing a well-rounded Liberal Arts education, Huron strives to be the best strategically small institution in Canada. The Huron experience equips students with the tools to be agents of change who receive faculty mentorship and unparalleled research opportunities from day one.

Dr. Rowan Williams was awarded the Oxford higher degree of Doctor of Divinity in 1989, and an honorary DCL degree in 2005; Cambridge followed in 2006 with an honorary DD. He holds honorary doctorates from considerably more than a dozen other universities, from Durham to K U Leuven, Toronto to Bonn. In 1990 he was elected a Fellow of the British Academy. He was elected as a Fellow of the Royal Society of Literature in 2003 and of the Learned Society of Wales in 2010. In 2013, he was made a life peer, becoming Lord Williams of Oystermouth, in the City and County of Swansea. Dr. Williams took up the mastership of Magdalene on 1 January 2013.

Dr. Williams is a Welsh Anglican bishop, theologian and poet, who, from 2002 to 2012, was the 104th Archbishop of Canterbury and Primate of All England. He was previously the Bishop of Monmouth and Archbishop of Wales, making him the first Archbishop of Canterbury in modern times not to be appointed from within the Church of England. Williams spent much of his earlier career as an academic at the universities of Cambridge and Oxford successively. He speaks three languages and reads at least nine.